Does sugar lead to heart disease?

As a general rule, if something is bad for our health, we are told about it. In 1964, for example, the American Surgeon General published a report confirming the link between smoking and lung cancer – since then the tobacco industry itself has been obliged to warn customers of the harmful effects of its products. While smoking remains the leading cause of cancer, according to the World Health Organization (WHO), there isn’t a smoker on earth who can claim they haven’t been warned.

The AIDS epidemic of the 1980s prompted similarly vigorous campaigns warning about the dangers of unprotected sex and sharing needles. So it seems entirely reasonable that we should be given stark warnings about anything that poses a serious threat to health, yet there is one substance that, for some reason, continues to escape the net:

There is a vast difference in public perception between sugar and cigarettes. While the latter is recognised without question as an addictive killer, sugar remains little more than a guilty pleasure, and in many people’s minds an innocent treat. As long as you brush your teeth thoroughly and get some exercise, what’s the harm?

Well, an increasing body of research is showing refined sugar – as opposed to the natural sugars found in fruits and vegetables – to be right up there with smoking as a major killer. Both are packed with harmful chemicals, both are known to be addictive, and both cause untold damage to our vital organs – especially the heart.

A study published in JAMA (Journal of the American Medical Association) found that people who consumed 25% or more of their daily calories from sugar were more than twice as likely to die from heart disease compared to those whose diets included less than 10%. Overall, the study found that the odds of dying from heart disease increased in tandem with the percentage of sugar in the diet, regardless of other factors such as sex, age, weight and physical activity level.

A study published in JAMA found that people who consumed 25% or more of their daily calories from sugar were more than twice as likely to die from heart disease compared to those whose diets included less than 10%.

In both smoking and sugar consumption we are looking at two serious evils. The world is yet to grasp just how dangerous sugar can be.

Sugar consumption and the path to heart disease

The link between refined sugar and heart disease consists of multiple strands. The first is the effect of sugar on insulin. When you eat that donut or drink that fizzy drink, the sugar passes very quickly into the bloodstream, triggering the body to release insulin to absorb any excess and stabilise blood-sugar levels. Load your body with too much sugar and the resultant insulin spikes lead to the body building an insulin resistance.

This, in simple terms, is how type 2 diabetes develops. Diabetes is listed by the American Heart Association as being one of the seven major controllable risk factors for cardiovascular disease. Adults with the condition are two to four times more likely to die from heart disease and at least 68% of people aged 65 or older with diabetes die from some form of heart disease. Further to this, however, a 2012 meta-analysis published in the journal PLoS ONE found evidence of a link between insulin resistance and heart disease in cases where type 2 diabetes has not yet been diagnosed.

High sugar consumption is also directly linked to obesity, the prevalence of which is twice the global average here in the UAE. Obesity is another major risk factor for heart disease, leading to hypertension (high blood pressure), diabetes and atherosclerosis (hardening of the arteries), which can cause clots, resulting in heart attacks and strokes. 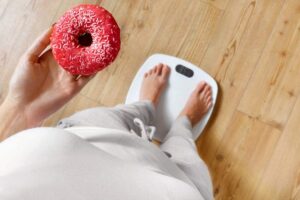 Excess sugars in your bloodstream may be converted into triglycerides, to be stored in fat cells throughout the body. The more sugar you consume, the higher your level of triglycerides, which has been directly linked with the risk of heart disease. Delving in deeper still, a 2013 study by the University of Texas Medical School discovered that a certain molecule in sugar – glucose 6-phosphate (G6P) – adds further stress to an already weakened heart. The study demonstrated that high levels of G6P, commonly seen in people with a high sugar diet, can cause damage to heart muscles that are already strained from both high blood pressure and high cholesterol.

How much sugar is OK?

If we continue the comparison to smoking, the simple answer is that you should cut out refined sugar completely. The presence of sugar in so many foods, however, makes this somewhat more complicated.

The WHO recommends that adults consume no more than 10% – and ideally only 5% – of their daily energy intake from what it calls ‘free sugars’, which it defines as ‘monosaccharides and disaccharides added to foods and beverages by the manufacturer, cook or consumer, and sugars naturally present in honey, syrups, fruit juices and fruit juice concentrates’.

The World Health Organization recommends that adults consume no more than 10% – and ideally only 5% – of their daily energy intake from what it calls ‘free sugars’.

That 10% maximum recommendation, echoed by the American Centers for Disease Control and Prevention, equates to just 250 calories for an adult male and 200 calories for a female. The UK Government recommends the lower 5% of daily calorific intake and equates it to 30g of free sugar, or around seven sugar cubes.

If that seems like a lot, consider the fact that the average American takes in a whopping 126g of added sugar every day, according to data from the World Atlas. And while America is the biggest consumer, other countries are not far behind. Both Germany and the Netherlands consume more than 100g per person per day, while Ireland, Australia, the UK, Mexico and Finland all fill up on over 90g – three times the recommended intake. No wonder that the obesity crisis is worsening fastest of all in wealthy countries.

The problem lies in the diet we eat, which makes it all too easy to overstep your daily recommended sugar intake. A typical 500ml bottle of cola, for example, contains around 50g of sugar, while a small bottle (300ml) of store-bought orange juice contains around 30g. The same is true of many foods popular in the Western diet: pasta sauces contain as much as 8g of sugar per 100g, while chocolate lovers could be taking in as much as 25g per 50g bar.

Even those who strive to live a healthy, active life have to work hard to avoid the sweet stuff. Popular sports drinks contain as much as 60g of sugar per bottle while foods such as muesli bars and ‘fat free’ yoghurts commonly contain around 8g per bar and 20g per pot respectively.

With sugar seemingly packed into everything we consume, whether knowingly unhealthy or sold under the guise of ‘low fat’, it can feel like it is impossible to avoid. But there are certain habits you can develop to make sure you’re not at the mercy of hidden sugar content.

The first is to prepare your own meals using fresh ingredients as often as possible. Sugar is an essential, energy giving part of our diet, present in all sorts of natural foods, particularly fruit and vegetables. The way your body processes natural sugars is far more controlled and balanced than the way it processes refined sugar. But it’s still important not to consume natural sugars in moderation too – excess sugar is excess sugar, no matter how you get your fill.

The way your body processes natural sugars is far more controlled and balanced than the way it processes refined sugar.

The more you cook your own meals from scratch, the more you can ensure that there is no refined sugar being slipped in seemingly innocent ingredients, such as sauces, pasta etc. When you do have to use pre-prepared ingredients, read the labels. And don’t be fooled into thinking that ‘low fat’ or ‘fat free’ means low sugar. Check out the nutritional content of the foods you eat regularly and make sure you’re not loading up on sugar inadvertently.

Getting to grips with the sugar threat is about knowing your enemy. Where does it come from? How much are you consuming? This starts with education.

Since the US Surgeon General published that report on smoking and lung cancer in 1964, attitudes towards smoking have changed radically. While it remains a global problem, killing over six million people a year, that number would be much higher had we continued to smoke at the rate of 1964. Back then, 42% of Americans smoked. Today that figure is 18%. If the warnings worked for smoking, they can work for sugar too.

It’s time we started taking the threat of sugar just as seriously.

PrevPreviousCan obesity increase the risk of getting infected with Covid-19
NextWhat’s killing my libido?Next